a little story about throw pillows 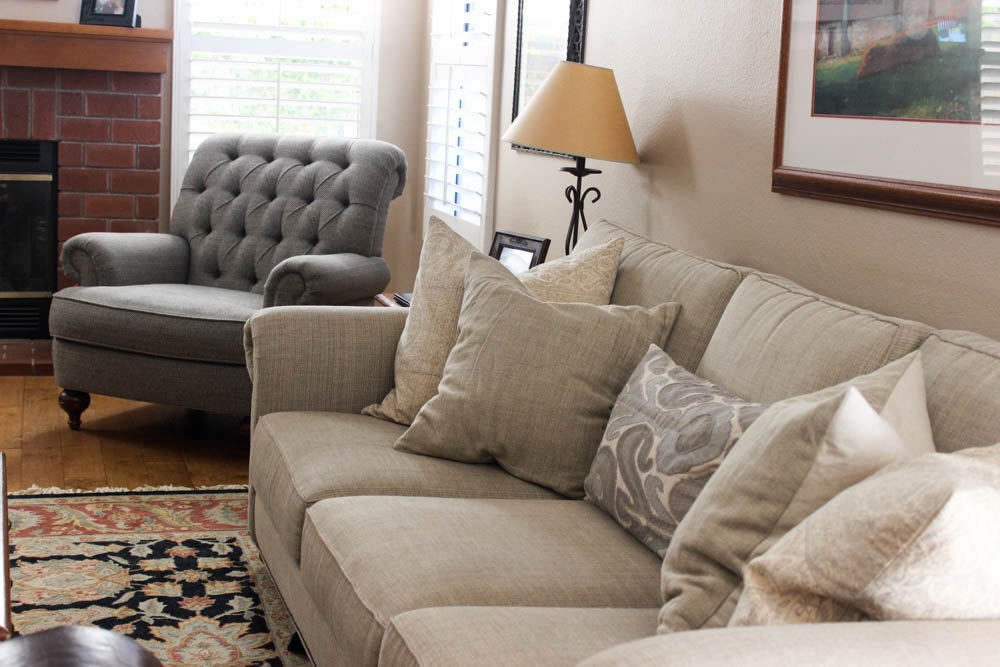 I have never felt great about my decorating skills. Over time I think that I have created a home that is fairly cozy–but I have never decorated a room and thought, “Done!” It is always a piecemeal affair with grand plans for some future date when I will be more grown-up and confident in my decorating skills. Because of this, I always take advantage of the free interior designer service when we buy furniture. In the past, this has worked fairly well, but I never really completed whatever plans they set out–which usually involves buying $10,000 worth of furniture.

As I pieced together our family room over several years–one year replacing the sofa and a chair, another year another chair–I began realizing that this room was not coming together. We have a neutral sofa, and a dark brown leather chair. This was the first problem–I felt the sofa was too light and the chair was too dark. So we bought a “medium” chair to fill out the room and to help bridge the contrast gap. Well–that chair sort of read “gray” when the sofa was reading “tan”. Ahhh! This room was not coming together–even with the help of an Ethan Allan designer and a bunch of expensive furniture.

I can’t afford to start over–so I invited my friend Terri over for tea one day. She has a model-home perfect house and just has a knack for this type of stuff. I don’t know why I didn’t get her involved earlier. The first thing she noticed was that the throw pillows on the sofa were contributing to the problem–they highlighted the tan in the sofa instead of the gray than is actually in there.

Next stop–Pottery Barn to look for throw pillows to solve my problem. (Full disclosure: this “next stop” actually happened about a year later.) This was actually a hilarious scene, as we found a neutral sofa in PB (not hard) and Terri started grabbing pillows from all over the store, trying them in different combinations. Several sales people approached us to help, but backed away once they realized that Terri seemed to know what she was doing. I fully expected that I would get some pillows that added some color to the sofa (isn’t that what throw pillows are for?!)–but ended up with more neutral pillows that actually bridge the gap between the tan and gray. 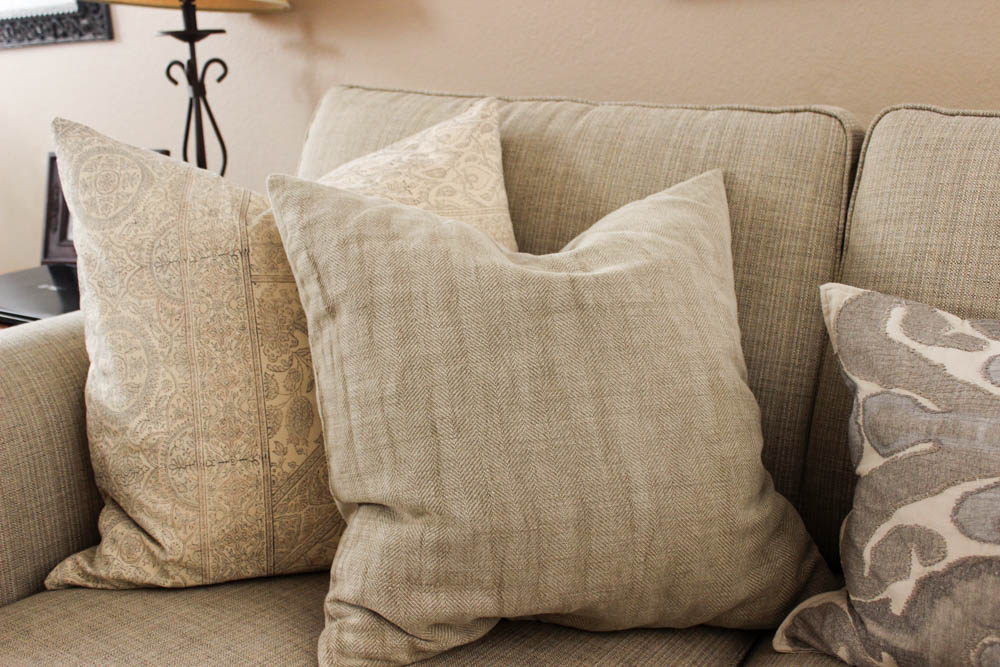 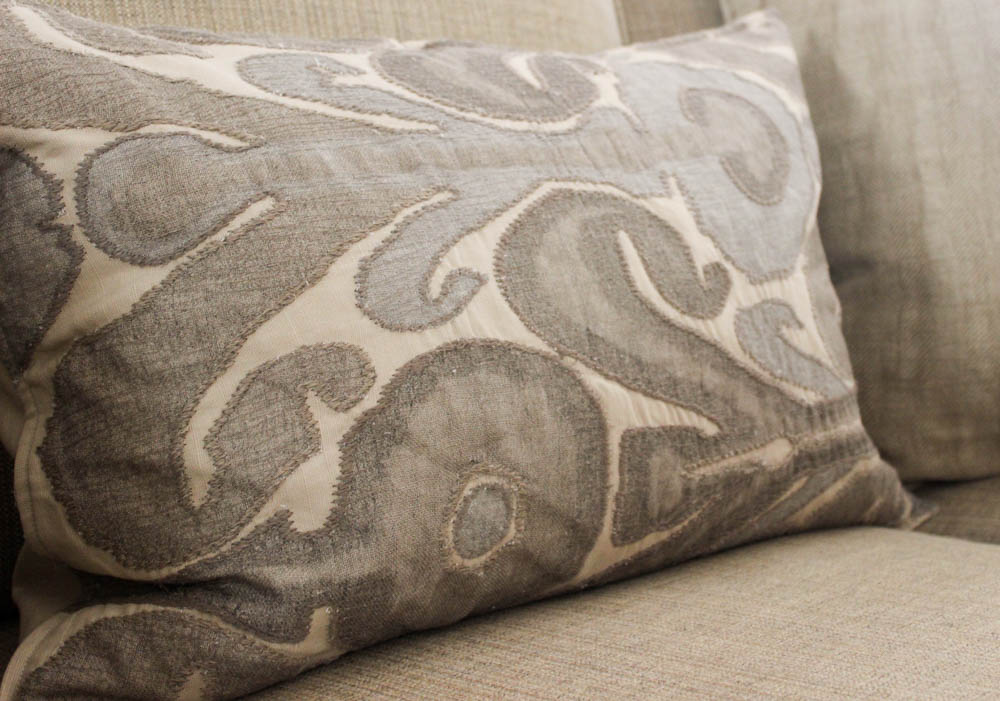 I was skeptical. I kept telling her, “There is no way  my husband is going to go for all these pillows! He hates throw pillows! The kids will just throw them on the floor! (Is that why they are called throw pillows?) 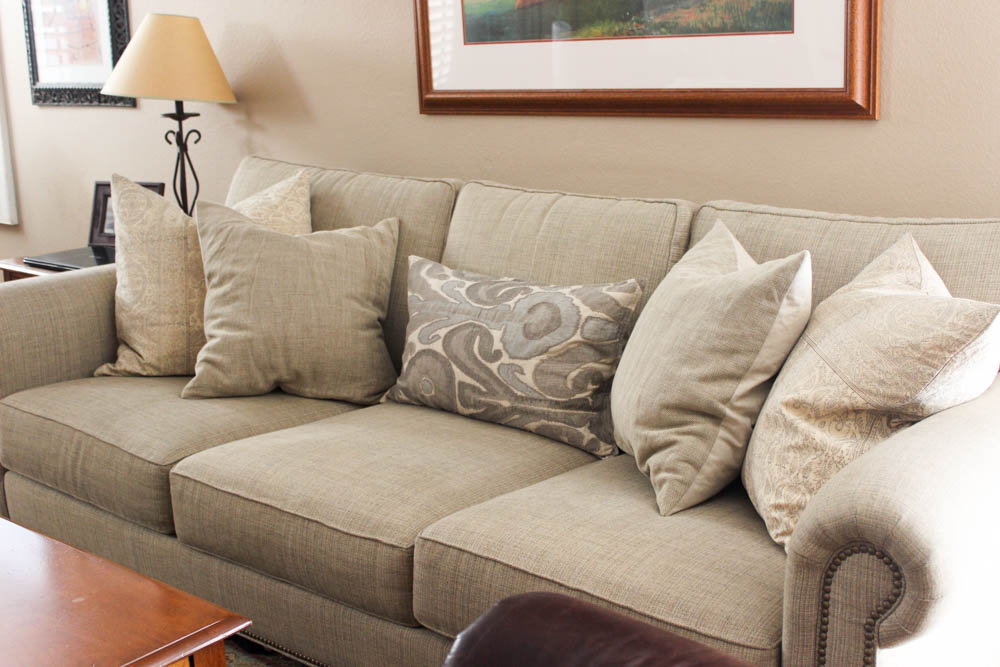 Terri assured me that these were feather pillows and made the sofa more comfortable (she was right! Our old pillows are as hard as rocks compared to these). Also, we realized that we have enough color going on in that room with the oriental carpet, brink fireplace, and paintings, that keeping the sofa a bit more neutral actually helped to calm things down a bit.

My next neurotic fear was that now that we have five (!) pillows on this sofa that are all scrunchy, comfy–I was going to spend the rest of my life fluffing them. Because this is what it looks like when everyone leaves in the morning. 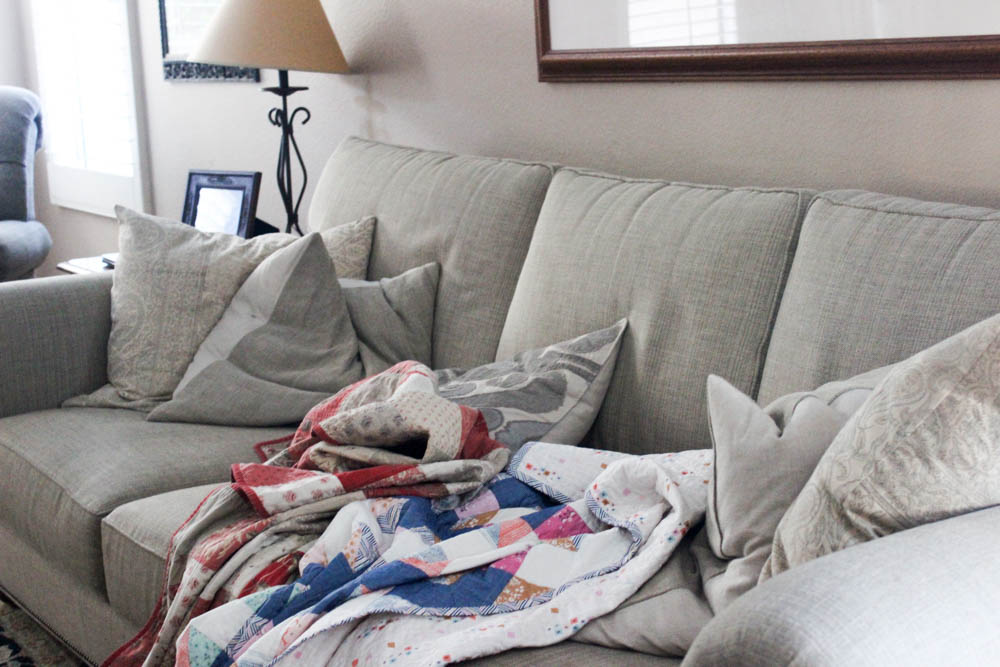 And I think it may be true about the constantly straightening (sigh). But they really are so comfortable and I now feel like I’m living in a PB catalog. And I was already folding all those quilts that everyone leaves on the floor each morning anyway–so what’s a few (5!) pillows.

I mentioned over on Facebook the other day that Terri also took down all my decor items in the family room and living room and put back half of them. And it all looks so much better now. Everyone should have a Terri.

Now that I have solved the Throw Pillow Problem, I guess I can move on to other life and death matters like why I can find a rug the right size for the living room. First world problems 🙂 Oh, and I found the perfect place for those pillows I love–in the living room aka my office. And Teddy loves them too. 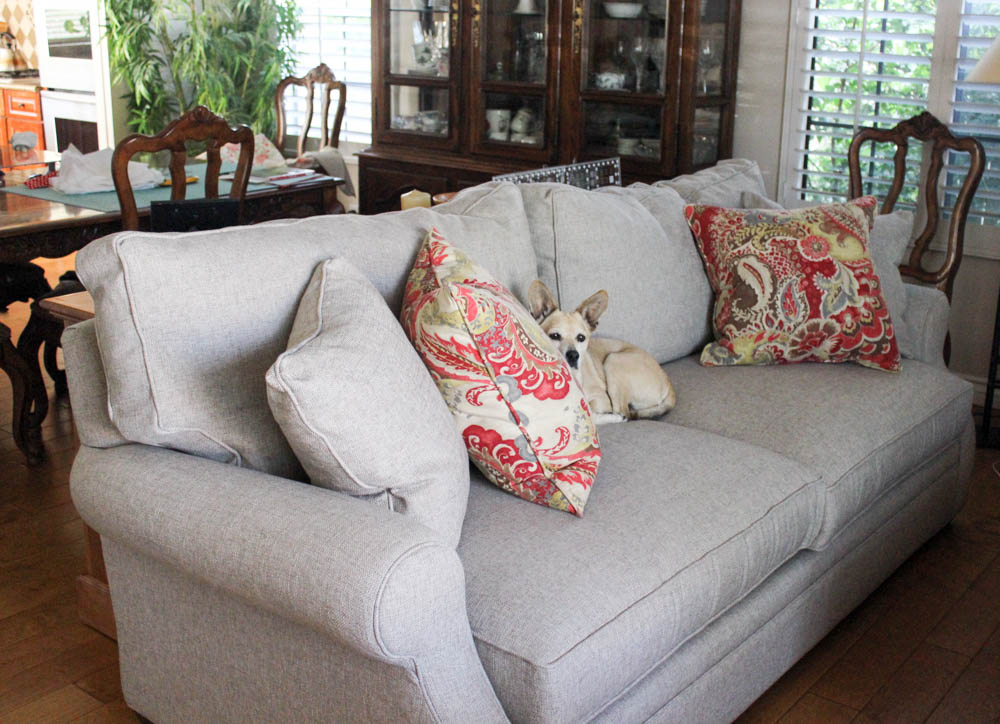