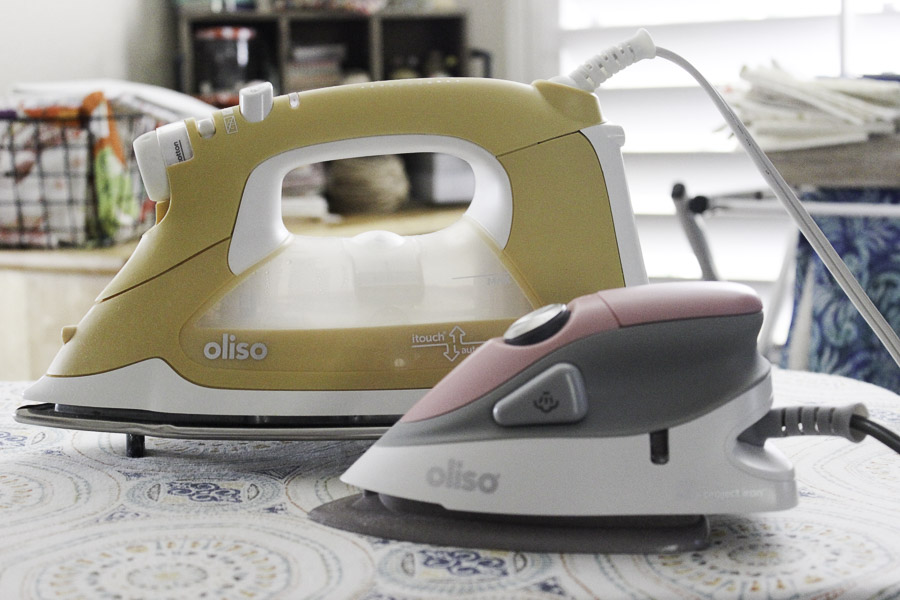 Let’s talk ironing today. Or “pressing” as it is known in quilting. As quilters, an iron is one of the most important tools in our sewing room and one that is worth investing in.

(Disclosure: Some of these are affiliate links, which means I make a small commission if you buy from them, at no additional cost to you. Rest assured that I only recommend products that I know and love.)

Oliso was kind enough to send me two irons to try out: the full-size Oliso TG1600Pro Smart Iron and the Oliso Mini Project Iron.

I’ve been using both for over a month now and feel like I know them pretty well.

The first thing I noticed when I took this iron out of the box is that the cord is LONG! I love a long cord so that I have lots of options about where my ironing board is placed and so that there is never any tension on the iron while pressing.

The second thing that made me so happy is that the instructions tell you NOT to put distilled water in the tank, but to use tap water instead. After years of buying distilled water specifically for my previous iron–this was music to my ears. And speaking of filling the water tank–because this iron resides in the horizontal position, the tank is so easy to fill.

This brings me to the main difference between this iron and every other iron. You keep it in the horizontal position and when nothing is touching the handle, it lifts up off of the ironing surface.

As soon as you touch it, it lowers down to the ironing surface. This change in workflow takes a little bit of time to get used to, but ultimately saves some time and wear and tear on your wrist. In my opinion, a good iron is a heavy iron, so not having to flip it back to an upright position is very nice. I also find that having the iron horizontal is more stable–I’ve knocked irons right off my ironing board in the past, as I tend to move my ironing board around quite a bit. I’ve not knocked this one off yet 🙂

If I’m pressing a lot of units one after another, I’ve learned to just keep my hand on the handle as I move from unit to unit so that it is not going up and down a million times. And if you don’t want the iron to raise and lower when you touch it, you can turn this feature off.

The handle is very comfortable and allows for good hand position, something that I appreciate, because my last iron had steam buttons positioned in a place that I was accidentally turning them off and on every time I put my hand on the handle.

Sometimes I like steam, and sometimes I don’t. I’ve found that some irons work well with steam, but aren’t hot enough without it. I’ve tried this iron both ways and I’m happy to report that it works great both with and without steam. You can even control how much steam–but I always want it full steam and as hot as it goes.

We quilters are not ones that want our irons shutting off after 5 minutes. Quilting involves a lot of back and forth between the sewing machine and the iron. It’s so frustrating when you get up to go to the ironing board with your blocks and you have to stand there and wait for the iron to heat back up. The TG1600Pro has a 30-minute auto shut-off! I’ve never had an iron that stayed on for that length of time and I am loving it! If you happen to knock it over though, it turns off in 30 seconds.

The only slight downside about it is that it takes a while to get used to leaving it horizontal after a lifetime of setting irons on end. But totally worth it!

I was super excited to try out a smaller iron. My first thought was to set up a small pressing station next to my sewing machine to press small units as I was sewing them. I have a thick wool pressing mat that fits nicely to the left of my machine. It worked beautifully! I was able to press the smaller units that I was working on without getting up–a very nice set-up. Again, the cord is quite long, which gives me a lot of flexibility for where I can use it in my sewing space. And the cord is designed to neatly wrap around the iron for storage.

The mini iron does have a steam capability, but it’s not as “steamy” as the larger iron. For small units it works fine and by squeezing the buttons on either side of it–you can do a steam “burst” if you need it. And just like the full-size iron, you fill it with tap water. The iron does get plenty hot–which is mostly what I’m looking for in an iron.

Horizontal Position (yes, this one too!)

Because of its size, it doesn’t have the lifts that the Oliso irons are known for–but it does come with a silicone trivet that the iron safely rests on so that you can leave it in the horizontal position. All that Oliso training of leaving your iron horizontal still holds with the mini iron. And that same silicone trivet or “solemate” attaches onto the iron for storage and even has a little loop on it so that you can a store it on a hook.

Obviously, it’s a perfect travel iron, so if you go to “sew days” or retreats, it’s a great choice. Plus, isn’t it adorable?

Again, I don’t see many downsides to this iron, except that it doesn’t output steam like a full-size iron–but I wouldn’t expect it to.

I’m very happy to have both of these irons in my sewing room–I feel like I’ve upped my ironing game and have flatter blocks to prove it.

Pin it for later: