I’ve had my Juki TL-2200 QVP Mini for about six months now and thought it was time for a review. I get a lot of questions about this machine and I’m hoping that this post will answer them all for you! 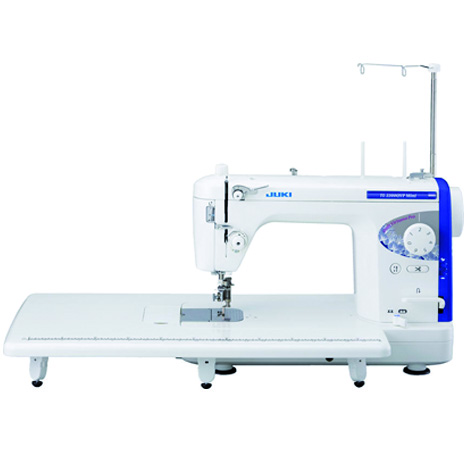 My number one priority for a new  sewing machine was that it would give me some extra space for quilting–both free motion and walking foot. I have a Babylock for piecing, but I just don’t enjoy cramming a quilt through that small throat space when it comes to the actual quilting part of making a quilt.

After much research and in-person testing, I ultimately decided on the Juki TL-2200 QVP Mini. It is the newer version of the ever popular, cult-classic Juki TL-2010Q. It is basically the same machine except that it comes with an extra open-toe quilting foot, and an improved walking foot (which was a common complaint about the TL-2010Q model), and a few other feet that were less important to me as a quilter. And it has a fancier paint job. Since both these feet were things I wanted anyway, the $200 price difference between the two machines seemed justified. I paid $1200 for the 2200–with full warranty and support from the dealer. This turned out to be more important than I realized.

Before I made my decision, I put the Babylock Jazz, Juki TL-2010Q, and the Juki TL-2200 QVP through their paces. I brought quilt sandwiches, quilting gloves, and patchwork pieces with me to the shop. Though I wanted so much to love it–since it has such a huge throat space–I had to rule out the Babylock Jazz because it was missing some crucial features for me: a needle down setting, and a thread cutter. It’s just so hard to go back after you get used to those features. I predict Babylock will add those features in the next model of that machine.

Then it was down to the two Juki’s. I had to figure out whether or not the additional feet were worth the extra $200 (which is about what they retail for) and ultimately I decided that they were. I also just liked the feel of that machine better on the floor of the dealer-but that could have been my imagination. The TL-2200 QVP usually goes for $1400, so they came down a bit on price for me and that helped make the decision as well. This dealer would actually sell me the TL-2010Q for the internet price of $999, but they would not handle warranty issues for that price. I would have to deal with Juki directly in Florida. It turns out that I’m really glad that I decided to go with the machine that the shop would support the warranty.

The machine comes with an extension table. It is a bit smaller than the Sew Steady extension table that I had made for my Babylock, but I really don’t mind.

Another cool thing–all the Juki TL-series machines are made to fit the Grace quilting frames–so you can actually turn it into a very afffordable longarm! I don’t have room for that now, but it is an interesting possibility for the future.

Once I got it home, threading the machine and winding the bobbin went smoothly. The manual was great, and there are plenty of YouTube videos showing how to do these things on the TL-2010Q–and it’s the same for this machine. It took a few tries to get the hang of the needle-threader, but I’ve got it figured out now. This was the most helpful video for that feature. 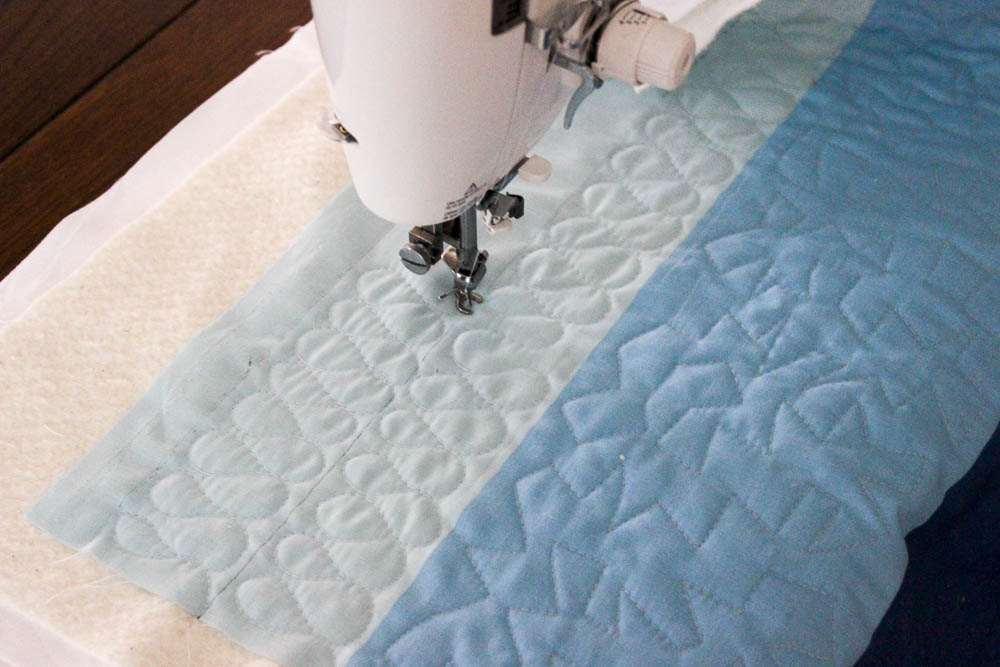 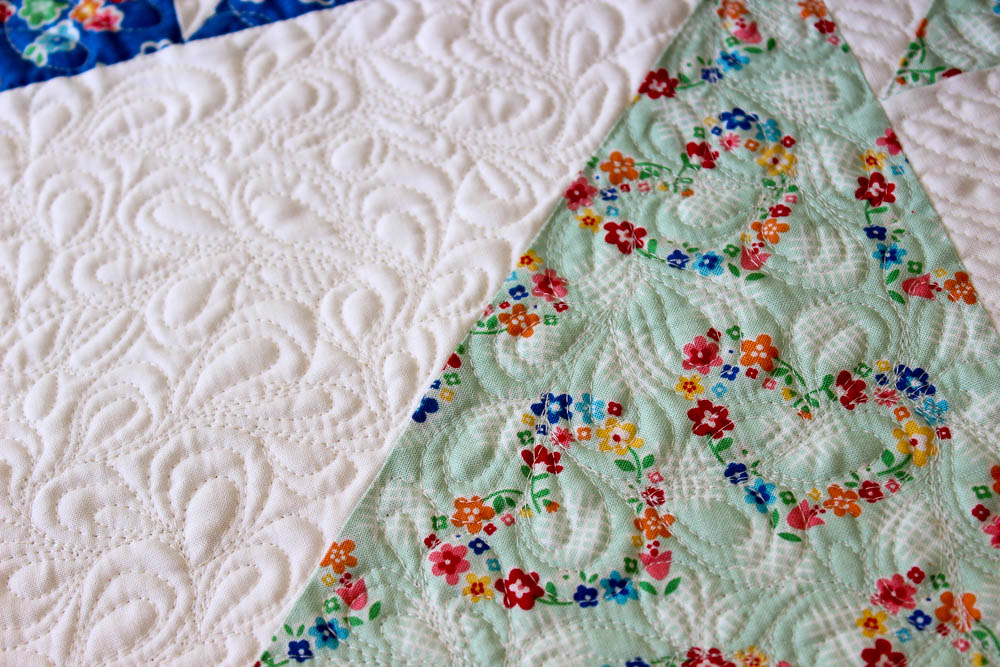 Once it was set-up, I  went straight in for free motion quilting. Since it’s a mechanical, straight stitch machine, it definitely feels different. It’s kind of like driving a new car, it takes some getting used to. The stitches are beautiful and I love all the space and visibility! There aren’t a bunch of features to talk about here–it’s a very simple machine–which I really like. It has a nice big foot petal and a knee-lift, which is another feature that I could not live without anymore. 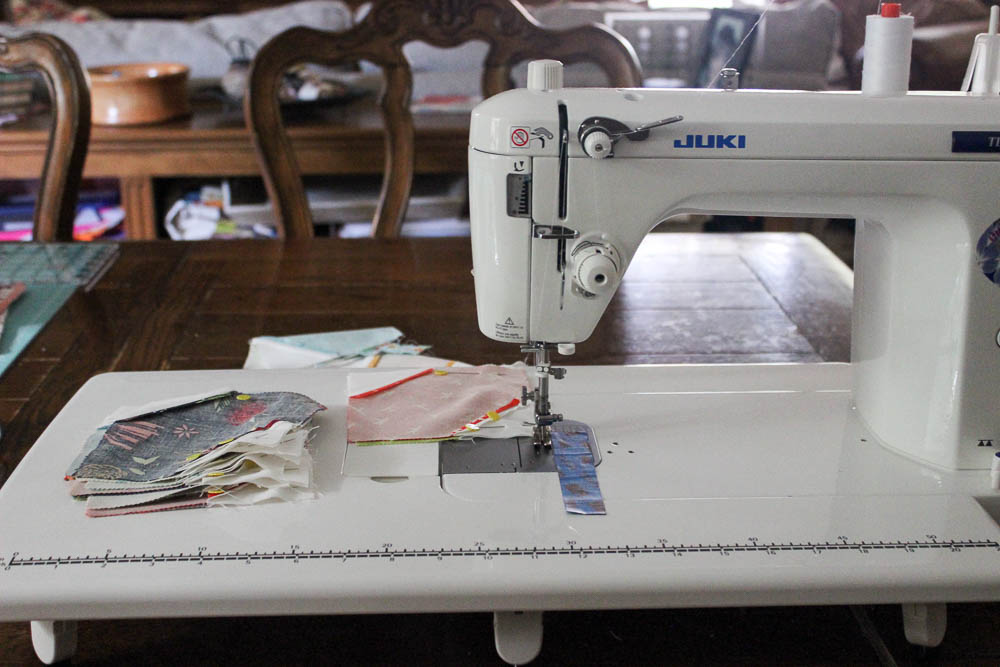 Then I put it through it’s paces on patchwork. I put my Babylock away and started piecing my current project with it. I tried two different patchwork feet–one with the usual guide and another called a compensating foot–which has a more serious guide on it. I thought I would like the latter–but I didn’t. I will try it again sometime though. I really like piecing on this machine–my only issue is the thread cutter is loud! Which reminds me–this machine has a thread cutter on the foot petal as well as on the machine! I didn’t think I would like it–but I love it! If you don’t like it, however, they give you something to put in the petal to disable that function. 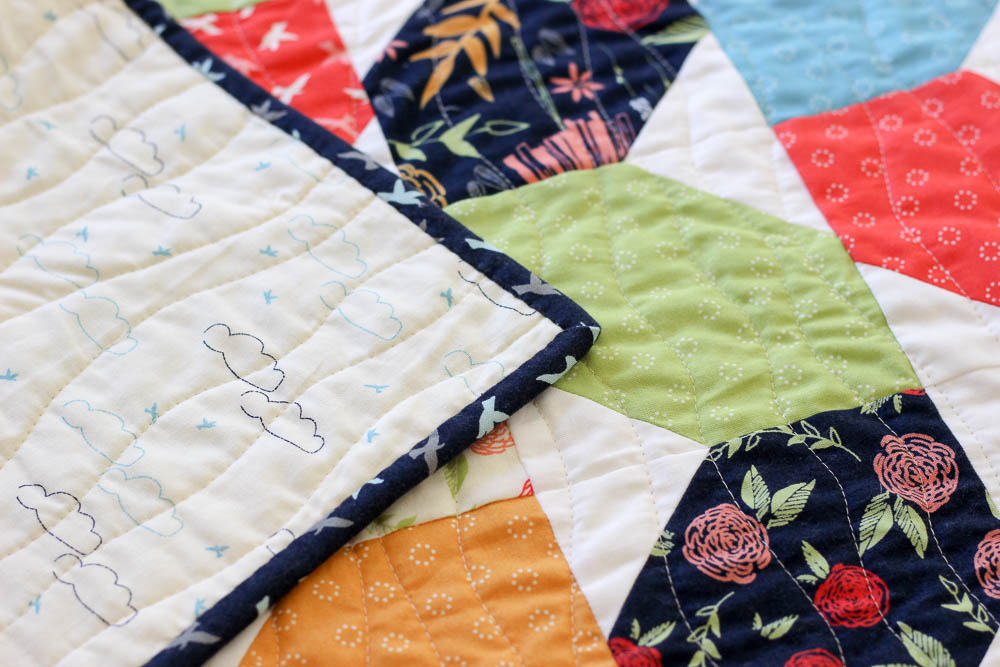 Then it was on to walking foot quilting. This is a straight stitch machine–so no built-in wavy line quilting on it, but it makes beautiful walking foot stitches! I just did a hand-guided organic walking foot curves on the quilt above.  I’d heard that the walking foot was loud, but when I tried it at the store, it didn’t seem too bad. As a quilted my small project, it got louder and louder, and something definitely seem wrong. When the foot eventually got jammed, I knew I needed to take it back to the dealer.

The dealer took a look at it while I waited (which was nice–since it’s about 40 minutes away) and told me that something was off in the alignment of the machine that only became a problem with the walking foot. Sometimes these things happen–as long as between Juki and the dealer they fixed it quickly–I was fine with it. But it really made me glad that I didn’t need to deal Juki myself–it was all handled under warranty.

Now that I’ve had the machine for six months, I will tell you that I had some fits with it a few months ago–something got off with  the needle bar that was causing thread breakage–and I was on a quilt deadline–so it was frustrating. But once again, the dealer and Juki dealt with it beautifully. Since then, I have completed several quilts on it and could not love it more!

So, I admittedly had a bit of a rocky start with this machine, but all was quickly resolved and I highly recommend it. I have a feeling that I would have also been very happy with the TL-2010Q, but I do love the extra feet that the TL-2200QVP Mini came with–so I have no regrets. I’ve provided a couple quick links below for the Grace frame and the TL-2010Q, but the TL-220QVP Mini is only available from a Juki dealer. You can find the closest one to you here.

For more reviews, tips, and inspiration, sign up for my monthly newsletter here. 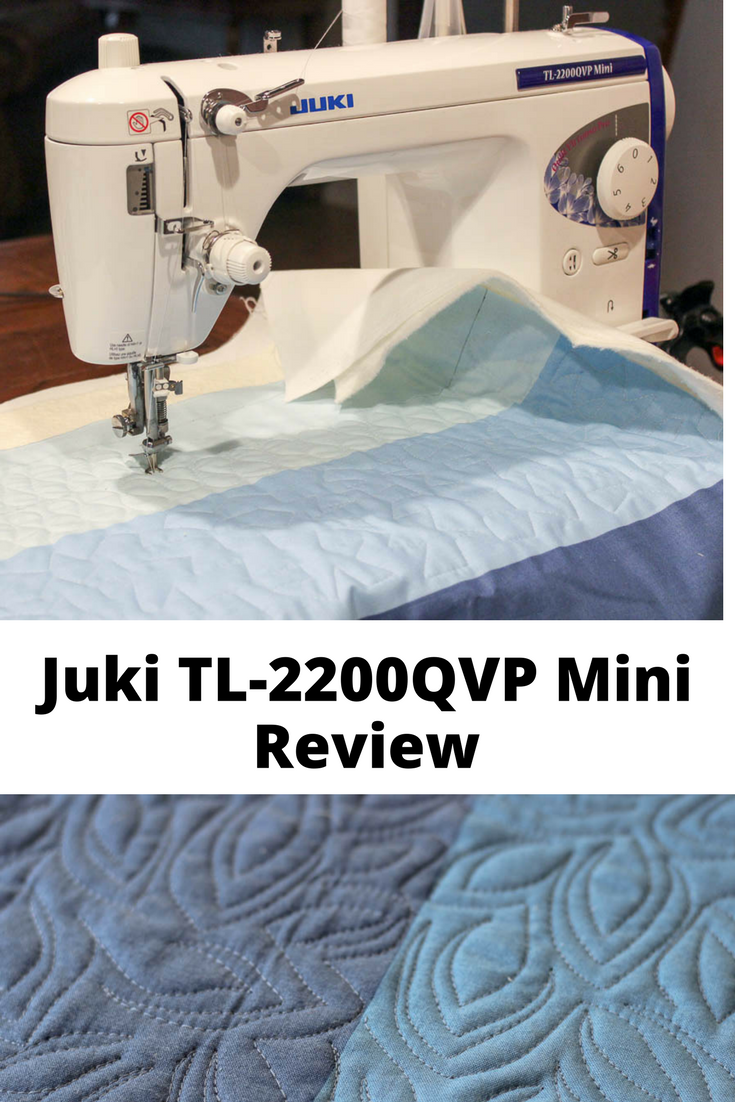