the humblest of meals 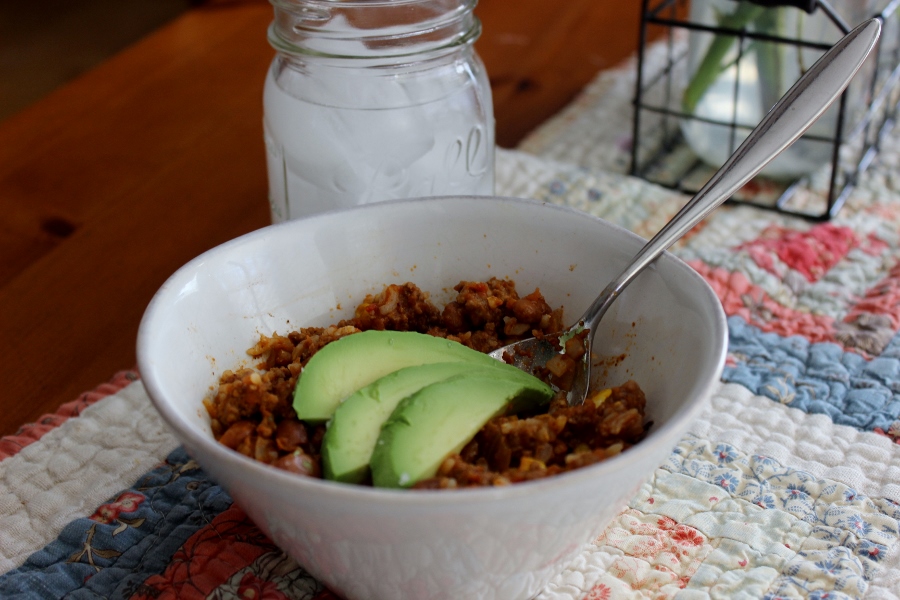 My dad dropped in unexpectedly this week. And what I mean by that is that he lives in Idaho, and I live in Southern California–and he called me at 1 pm to say that he would be there by dinner. That’s the way my dad rolls. I was so happy he was coming–I don’t see him as much as I’d like. My first thought went to what we were having for dinner. A quick check of my menu plan confirmed one of my deepest fears about hospitality: that what we were having for dinner wasn’t “company worthy”.

I cook nearly every weeknight (I have cleverly worked it out that my husband and kids cook on the weekend). I am not a bad cook–I know what I’m doing in the kitchen, even if I’m not as creative as I wish I was. But I often don’t think that what we eat day in and day out at home is anything special. In fact, I have several friends who basically don’t cook anything more complicated than boiling pasta and heating up a jar of sauce, but they each have these fabulous, signature dishes that they regularly pull out when they need to entertain or bring a dish to a potluck. I have no such dishes. I just cook decent, humble food on a daily basis.

This particular day, when my dad was on his way, revealed my deepest insecurity. This was an especially busy week, with some activity or another–mostly music performances almost every evening. So the meal plan was fleshed out with the quick and easiest of meals. A quick look at the calendar revealed that on tonight’s menu was Cowboy Grub (worst name ever). I never would have even tried this recipe if I hadn’t seen so many rave reviews online about it. In fact, I’m feeling bad because I was going to share the recipe with you, but I just realized that it s from the Trim Healthy Mama cookbook (again, with the terrible names!) and I can’t share it here. But it basically ground beef, brown rice, pinto beans, corn, diced tomatoes with chili powder, and cumin. It’s chili with rice and corn added in. The simplest of ingredients, thrown together and simmered for a few minutes–it is fast, easy, nutritious, and actually quite tasty. I was skeptical the first time I made it, but we all commented during dinner that it didn’t look like much, but it was tasty!

I asked my husband, who was home for lunch, if he thought I should make something else for dinner. He wanted to know why. “It’s just not really company food, is it?” Now this is my dad–I don’t need to impress him or anything, but still. He looked at me like he had no idea what I was talking about, so I made Cowboy Grub (cringe–please can someone come up with a better name than that?!) for dinner.

And you know what? It was tasty and my dad was appreciative, especially after several days of eating in restaurants. The dinner was fine, the conversation was good and I need to learn to let my perfectionism go.

In fact, it made me think of visiting my dad years ago. I was there in Idaho with the kids and we were heading home in a couple of days. We decided over morning coffee to invite all the local relatives to come over for a barbecue that night–totally last minute. If it had been my house, I would have been freaking out–madly cleaning and rifling through cookbooks to make something “special”. But not dad. He got up and went to the grocery store and came home with a package of frozen hamburgers, a couple of tubs of pasta salad and potato salad from the deli, and a few bags of chips. He didn’t clean the house. He didn’t make anything from scratch. And you know what? That get together was my best memory of that trip–friends and family and food. There is a lesson that I need to remember.

this week in my kitchen

Linking up with Beauty That Moves. Just a peek at what was happening in my kitchen this week. Breakfast on the patio. Chocolate Chip cookies. Not a pretty shot of this Beef Chili. But it was tasty. And the first Strawberry Jam of the season. […]

I just wanted to pop in to say that I’ve changed this blog’s name from They Grow Up Too Fast to Simple. Handmade. Everyday. to reflect the types of things that I want to write about. I started this as a Mommy blog about six […]